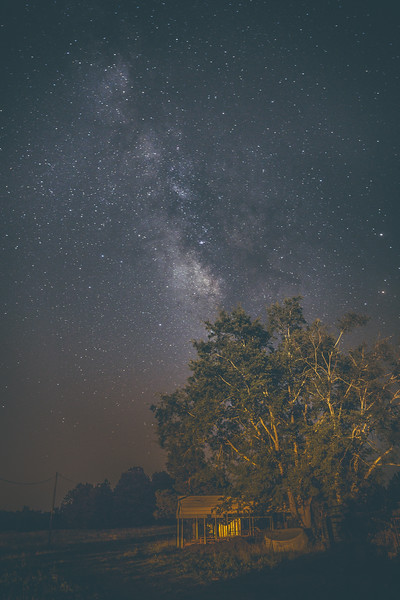 A couple of nights ago I convinced my wife to ride with me to find a nice dark spot to try and capture the milky way. I used my star tracker app to find out where it was and off we went, south of town to find a good spot. It was around 11:00 pm when we set off and I knew that south of town (West Point) would be the best spot because the largest part of the Milky Way was supposed to be visible in the southern sky and there are less city lights to block our being able to see it, since the closest larger southern city was Meridian (90 miles away) and Starkville would be to the west so its lights shouldn't be an issue.

A few miles before Artesia, I knew of a dirt road with no houses, and likely no traffic, so we took that road to do a little test. I was happy to find that when I got out of the car to set up my camera and tripod, that I could faintly see the Milky Way with my own eyes. I knew that this was a guarentee that I could capture it with my camera since my camera was going to be able to gather more light than my eyes could once I took a photo. The hardest part about photographing the Milky Way is light pollution. Unfortunately it's often very hard to find a dark enough sky to really capture it since you have to escape the city lights. It would have likely been hard to photograph from any other point of view (East, West or North) without having to drive over 30-40 miles from town because of the location of towns around the Golden Traingle area.

The test went well, but I needed a more interesting shot, and also a place where we could point the headlights of our car towards the subject to be able to get good focus. We drove on into Crawford and took a backroad and found this little farm a couple of miles off of the highway. We pulled up to the gate, shone the headlights and I got my focus right and off I went snapping photos. I have photographed the milky way before, but I used a different technique, geared towards a more light polluted area, which didn't allow me to see the results in camera because it produced too bright of an image that I had to tone down in post to see the if I captured it. This time, I prepared by trying to figure out some caculations beforehand so that when I came to a spot I knew what settings to try first that would allow me to see the result in camera, which worked out very well. I used the 500/600 rule which you can read about here.

I'm really happy with the result, but I need to find more places to shoot the Milky Way so if you know of any good dark areas to do that, with some interesting subject matter, please let me know!

A couple of nights ago I convinced my wife to ride with me to find a nice dark spot to try and capture the milky way.